Woo, hoo!! I. Am. Psyched. This is why, I tell my husband, I won’t consider moving to Washington state so he can live near his sisters. I just can’t leave McCarter Theatre behind. Or other NJ theaters such as Two River Theater,  George Street Playhouse, Shakespeare Theatre of NJ, Paper Mill Playhouse, and more.

OK. Let’s get back to McCarter Theatre, which presents works in its 1,100-seat Matthews Theatre and the 360-seat Berlind Theatre in Princeton. 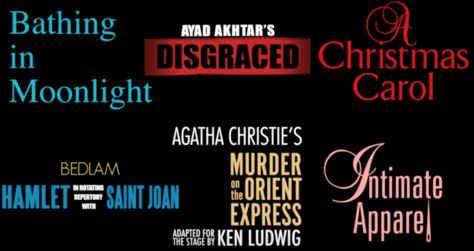 “This season is an ambitious lineup, marked by the quality and variety that defines all we do,” said McCarter Theatre Center artistic director and resident playwright Emily Mann. “We are featuring some of the finest playwrights in contemporary American theater, three of whom are Pulitzer Prize-winners, one of whom is an Olivier award-winner, and all of whom call McCarter an artistic home.

“We take great pride in creating a theater series that
offers a rich diversity of stories and styles, bringing you plays that are in conversation with each other and which encourage discussion on and off stage,”she added.

Theatre in 2003 to bring you this lyrical new play
about falling in love and longing for a place to truly call home.

Guided by compassion, warmth, and the implicit love of God, Father Monroe believes in keeping the faithful doors of his Miami church open to all. Upon discovering that Marcela is struggling to keep the
doors of her own house open, he steps in to help with such heart and kindness unlike anything the Cuban-American family has ever experienced. When small acts of kindness and generosity blossom
into pure love, the lines between vocation and passion blur and Father Monroe finds himself at a complex crossroad of adoration and divinity.

Between the lies we tell ourselves and the secrets we keep from others, how do we find our true place in the modern world?

Amir Kapoor is trying to live a good life. He’s married to a beautiful woman, lives in a spacious Upper East Side apartment, and is a successful lawyer at a prestigious Manhattan firm. When conversations at a dinner party abruptly turn confrontational, racial and religious tension fills the air and Amir must
grapple with his own ambition and stifled cultural identity.

He is a dark, enigmatic prince obsessed with seeking revenge for his father’s death. She is a steadfast rebel who challenged the powers of the church to restore France to greatness. Both are iconic figures
from two great dramatic classics.

Presented in rotating repertory by Bedlam Theatre Company, one of New York’s most innovative and lauded ensembles, four masterful actors bring two of Western literature’s greatest characters to life in
a riveting stripped-down staging. Bedlam’s signature style creates an immersive tour-de-force that illuminates these classics with sheer inventiveness and energy.

The exotic Orient Express is about to go off the rails. With a train full of suspects and alibis, it’s the perfect mystery for infamous detective Hercule Poirot.

An iconic classic called  “positively miraculous” by The New York Times book review, Agatha Christie’s “Murder on the Orient Express” has thrilled mystery lovers from the page, the screen, and over the airwaves since its publication in 1934.  In collaboration with the Agatha Christie estate, Olivier Award-winning
playwright Ken Ludwig (“A Comedy of Tenors,” “Baskerville: A Sherlock Holmes Mystery”) and multi-award-winning director Emily Mann (“Baby Doll,” “Five Mile Lake”) join forces for the first time to present this production of Agatha Christie’s mystery.

The year is 1905. A young, single African-American seamstress is supporting herself by creating exquisite lingerie for wealthy Manhattan clients. When an unexpected letter arrives from a stranger, a desire is awakened within her that leads to the love she yearned for, but is nothing like she expected.

Winner of the New York Drama Critics Circle and Outer Critics Circle Awards, this tender and historical romance from Pulitzer Prize-winning playwright Lynn Nottage (“Ruined,” “Sweat”) is a deeply moving tale of one woman’s discovery of her own empowerment and the true meaning of intimacy.

Subscriptions and membership packages for the 2016-2017 Theatre Season are available now by calling McCarter Theatre Center at (609) 258-5050, online at www.mccarter.org, or in person at the McCarter Theatre Ticket Office, 91 University Place in Princeton.

A reimagined  production of Charles Dickens’ classic, “A Christmas Carol.” McCarter is in the early stages of building
a brand new version of Ebenezer Scrooge’s magical journey through Christmas past, present, and future. Using period-specific carols and music, a cast of professional actors will be joined by ensemble members chosen from the greater Princeton community.