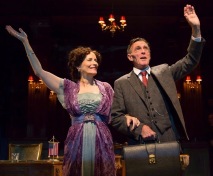 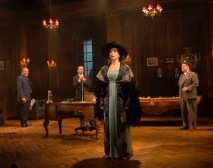 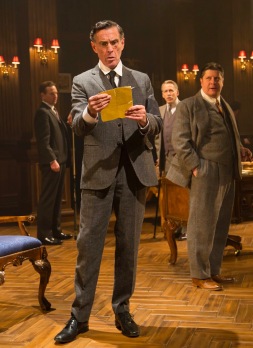 In 1915, when two people using a telephone to hold a conference call very modern idea, the U.S. Senate majority leader was completely at odds with the Democratic President of the United States over foreign policy. A 100 years later, it seems, not much has changed. At least now when it comes to politics.

“The Second Mrs. Wilson,” a new play written by George Street Playhouse favorite Joe Pietro (his fifth here) and directed by Gordon Edelstein, artistic director of the Long Wharf Theatre in New Haven (where the show received its world premiere in May), focuses on the relationship between President Woodrow Wilson and his marriage to Edith Galt against the backdrop of World War I, the Treaty of Versailles and creation of the League of Nations.

DiPietro is one impressive playwright. His work includes the  musical stage adaptation of the cult film  “The Toxic Avenger, ” Broadway’s “Memphis,” the long running off-Broadway hit “I Love You, You’re Perfect, Now Change,” and the current off-Broadway show “Clever Little Lies,” starring Margo Thomas. He has won
Tony Awards for both the book and the score for “Memphis” and the book for “Nice Work If You Can Get It.”

His work is smart, clever, insightful and sprinkled with  comic lines. “Mrs. Wilson” is all that plus being dramatic, confrontational,  perceptive, and kinda scary because some of the same arguments we hear today were the same back then. While Act One is about Wilson’s desire to keep America isolated from Europe’s troubles while he meets, woos and marries the widow Edith Galt, the second act focuses on his wife’s and physician’s efforts to isolate Wilson from the outside world after he suffers a stroke from which he never full recovers while his wife takes over running the country.

Laila Robins (known for the TV drama “Homeland” and performances at the Shakespeare Theatre of New Jersey and McCarter Theatre), the only woman in the cast, plays Edith who bemoans how much time she spends in the company of men yet seems to relish sparing with them. John Glover is Wilson, a devout Presbyterian who firmly believes God sent him to save America. Wilson’s advisors are not pleased with the marriage and when word gets out that this female — the first to own a car in Washington and successfully ran and expanded her dead husband’s business — reads Wilson’s letters and documents … well no one in Washington is pleased.

Senate leader Henry Cabot Lodge (Sherman Howard) demands war be declared after heated debate about America not taking action when the Germans sink ships killing our citizens. Equally fierce is  Wilson (Glover, Tony for Best Actor for “Love! Valour! Compassion!”also known to TV audiences as Lionel Luthor on “Smallville” ) who insists he will not send our troops to foreign lands to die in the mud.

Alexander Dodge’s set design (Tony Award nominations for “A Gentleman’s Guide to Love and Murder” and “Present Laughter”) of a single large room with desk, pool table, and numerous groups of club and straight-back chairs encased in wood paneling allows actors to move downstage for key moments in the light (designed by Ben Stanton, Tony Award nomination for “Fun Home”) then drift upstage until needed again.