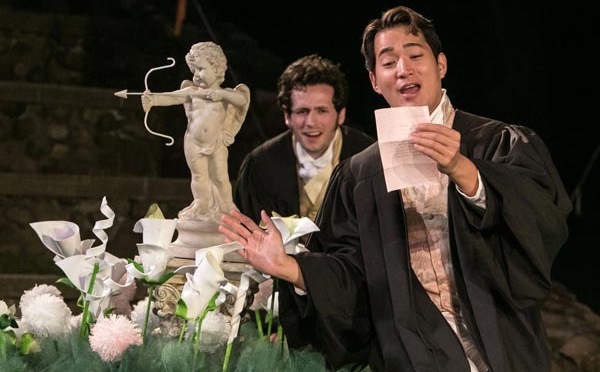 The King of Navarre (Jonathan Raviv) and the Princess of France (Jesmille Darbouze) are smitten from their first meeting. (Photo: Avery Brunkus)

The 2015 outdoor play was “Love’s Labours Lost” and featured, (from left), Maria (Carrie Walsh), the Princess of France (Jesmille Darbouze), and Katherine (Kristen Kittel) look on as Rosaline (Susan Maris) shows off her gift sent by the men. (Photo: Jerry Dalia)

Longaville (Aaron McDaniel) is deep in thought, as the other men prepare to take their oath. (Photo: Avery Brunkus) 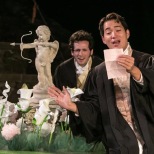 “Love’s Labour’s Lost” is not one of Shakespeare’s more popular plays. The superb production currently being staged at the outdoor Greek Theatre at the College of Saint Elizabeth, though, sparkles like a diamond.

Slimmed down and highly accessible, it’s a great production to introduce your kids to Shakespeare. Heck, it’s a great intro for all ages. Kids age 5 and younger are admitted free. At a recent matinée in Morris Twp., NJ, I saw numerous youngsters ranging from 6 to young adults. On departure, three pre-teen girls in front of me were saying how much fun they had.

Produced by the Shakespeare Theatre of New Jersey and helmed by veteran director Brian B. Crowe, this early Shakespeare comedy is filled with the kind of hallmarks that show up in Shakespeare’s later and greater plays: mistaken identity, witty banter, disputes between characters, love letters delivered to the wrong ladies, shenanigans with jewelry, a dim servant, a clever servant, a flamboyant foreigner, a play within a play, and unrequited love.

First we have the The King of Navarre (Jonathan Raviv), and his entourage: Berowne (Ben Jacoby), Dumaine (Austin Ku) and Longaville (Aaron McDaniel). Early in the play they pledge to follow the king who has vowed — for the next three years — to renounced the company of women and spend his time studying and fasting.

Berowne hesitates greatly before signing the pledge, reminding the king that a delegation headed by the Princess of France is shortly expected. Nevertheless, he joins the group — but we all know this is a plan doomed to failure.

Soon arrives the Princess (Jesmille Darbouze) and her Ladies: Rosaline (Susan Maris), Maria (Carrie Walsh) and Katherine (Kristen Kittel) and the men’s resolve begins to crumble. Curious to see the ladies, the men decide if they hold books in front of their faces that counts as not “seeing” them.

Crowe’s staging of the meeting between the men and women is choreographed for maximum laughter as they two-step around the ladies while shifting their books from one side of their face to the other. But, of course, they sneak a peek at each other and immediately fall in love.

Much of the rest of the two-hour long production is a verbal sword fight amongst the besotted. Berowne and Rosaline are the best among them and much resemble an early version of the sparring couple Beatrice and Benedict from “As You Like It.”

The love-making is spread around and includes the Spaniard Don Armado, delightfully played in over-the-top form by Jeffrey M. Bender, who we discover late in the play has impregnated the servant girl Jaquenetta (Rebecca Gomberg) who is also fancied by country bumpkin Costard (Connor Carew).

The play-within-the-play comes toward the end when the schoolmaster Holofernes (BruceCromer) and Nathaniel (Joseph Hamel), a curate, gather the servants to perform vignettes of famous heroes from history, similar to the Rude Mechanicals in “A Midsummer Night’s Dream.”

One of the delights each summer is how the director will handle the noise generated by planes landing and taking off from the nearby Morristown Airport. It had rained most of the morning before the Sunday matinée I attended and it seemed like grounded planes were taking off one right after the other by the 4:30 p.m. curtain, most coming directly over the stage.

Since this is a play about love, scenic designer Charlie Calvert chose a statue of cupid to grace the stage. Whenever the roar of a plane grows too loud for the actor to be heard, he or she yells “CUPID!” and two minor characters emerge from behind stage and run around the apron of the stage stealing kisses or swatting at each other. By the time they get to the other side, the actors pick up where they left off. A sign also pops up proclaiming the interlude’s sponsor: Navarre Airlines presents Cupid Relay.