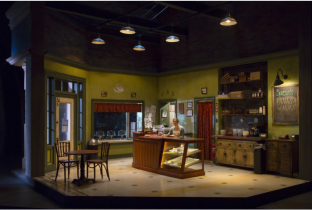 Kristen Bush longs to leave Five Mile Lake but feels obligated to look after her troubled brother Danny (Jason Babinsky at McCarterTheater in Princeton through May 31. (PHOTO: T. Charles Erikson)

Jamie (Tobias Segal) has a thing for Mary (Kristen Bush) “Five Mile Lake” at McCarterTheater in Princeton through May 31. (PHOTO: T. Charles Erikson)

Nicely acted and beautifully directed “Five Mile Lake,” a contemporary play by Rachel Bonds, is making its East Coast debut at McCarter Theatre in Princeton through May 31.

McCarter Artistic Director Emily Mann helms this 90-minute slice-of-life work in which not much happens as 20- and 30-somethings look for meaning in their lives during a 48-hour period in a small town near Scranton,  Pennsylvania on the edge of an unseen lake.

Childhood friends Jamie (Tobias Segal) and Mary (Kristen Bush) work at a cafe where the baked goods are made elsewhere and French major Mary longs to be living elsewhere, say Paris, or maybe Philadelphia. Jamie likes Mary a lot and his hometown just fine and spends his spare time renovating his house and checking on his aging mother.

Their early-morning-opening-the-cafe routine is broken by the unexpected arrival of Jamie’s older brother Rufus (Nathan Darrow), a doctoral candidate in classical Greek literature. (Lots of job opportunities there, right?) His dissertation is about Greek laments for the dead and he hasn’t written anything in more than a year. He may get kicked out of the program. He lives in New York City and is with his partner Peta (Mahira Kakkar), the bread-winner in the family as an editor at an upscale Manhattan magazine. They think a visit to Rufus’ hometown will help them with relationship problems and a recent miscarriage.

Also, Mary’s brother Danny (Jason Babinsky), an Afghanistan veteran with anger issues who can’t seem to focus, stay on task or hold a job, makes a brief appearance. It shakes up things — and us — for a brief time. Taking care of him is Mary’s other job that also ties her to her hometown.

There’s lots of talk, soul-searching, explaining, second guessing, bewilderment, guys drinking into the wee hours and one drastic act. The dialogue is realistic, but the play is boring. The “drastic act” happens off stage and even that doesn’t seem to have  the kind of impact it should. The characters don’t seem much different at the end. Has anything, will anything change?

The revolving set in the middle of the stage by Edward Pierce —depicting the cafe’s interior and exterior of Jamie’s house — surrounded with leafless tress and cool-colored lighting by Jeff Croiter give the perfect impression of an isolated town during the dead of winter.