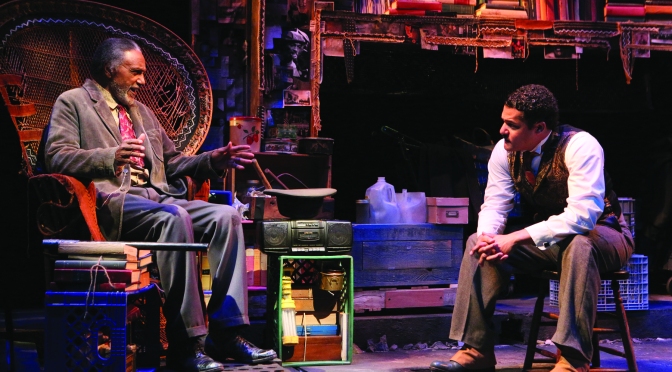 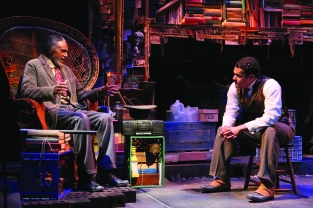 Zebedee (left, played by Charles Weldon) and Zeke (Brandon J. Dirden) in the world premiere of “Your Blues Ain’t Sweet Like Mine” at Two River Theater in Red Bank. (Photo: Michal Daniel)

Janeece (played by Roslyn Ruff) and Randall (Andrew Hovelson) in the world premiere of “Your Blues Ain’t Sweet Like Mine” at Two River Theater, Red Bank, NJ (Photo: Michal Daniel) 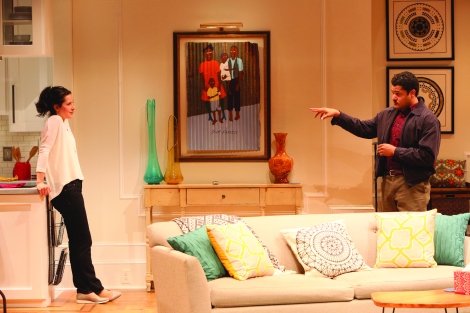 Looking forward to seeing Ruben Santiago-Hudson’s “Your Blues Ain’t Sweet Like Mine,” a passionate and explosive debate on America’s relationship to race this weekend at Two River Theater. It couldn’t be more timely with an upcoming presidential election and news cycles that often include stories of black men being killed by white cops.

Running through May 3 at the regional theater in Red Bank, NJ, the world-premiere wants audiences to stay for post-play discussions following every performance. That’s certainly one way to get people of various races together to talk.

Written and directed by Tony Award-winner Santiago-Hudson, the 90-minute play centers on an  Upper West Side dinner party invitation that brings an unlikely group together. Two River’s website says it “… brings humor and poignancy to one of the most potent conversations in American life. In our shared history, we all sing the blues. But are your blues sweet like mine?”

As a playwright, he won an Obie Award for his solo show “Lackawanna Blues” and numerous awards for his HBO screenplay.

He is currently co-starring on “Public Morals,” produced by Steven Spielberg, which is scheduled to air on TNT in 2015.

BONUS ALERT: Before the play a video interview with Santiago-Hudson will be screened in the lobby at 15-minute intervals beginning 45 minutes prior to every performance of “Your Blues Ain’t Sweet Like Mine.” And it’s a nice lobby with chairs and tables and wine and snacks. Lots of cool local restaurants, too.