NYTimes reporter Patrick Healy is my new favorite theater writer. It’s not just because of his A1 story today on “Duck Dynasty” planning to mount a Broadway musical, or the insightful Hugh Jackman profile Sunday or yesterday’s fascinating business story about “It’s Only a Play” offering producers of “The Audience” $400,000 not to evict them.

According to LinkedIn, Healy has been working for the Times for almost 10 years. He’s been doing good work here for a while so it’s probably just me who seems to think he’s been on fire lately. When I covered theater for the Asbury Park Press, Variety, Back Stage and the Drama League, I much preferred writing about the behind-the-scenes stuff. I loved seeing shows, but I wasn’t all that enamored  with the review process. (Major newspapers have the luxury of large  staffs so the reviewers only review and reporters talk to and write about the artists. Though this is changing as staffs shrink in size.)

I liked talking to the folks who made the art, made the decisions, built the shows. Healy gives theater lovers that info almost daily with breaking news, box office receipts, casting announcements, profiles, etc. You don’t often see  a theater story on Page One of a mainstream newspaper, but Healy’s “Bayou Meets Broadway” story was there today — below the fold.  I mean, it is the Times after all.

Oh, and the really good news, “The Duck Commander Family Musical” will not be using any members of the DD family. Real actors will get the parts.

Since the show is looking to open in Vegas this February you gotta wonder if some members of the Broadway community, among others — not too happy with family patriarch Phil Robertson’s comments comparing homosexuality to bestiality — hope what happens in Vegas stays in Vegas. 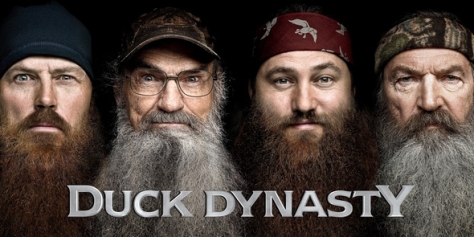